Fall to sea! Why didn’t they call 119?
Three years ago, I worked for one of the shipyard’s subcontracting companies in Gyeongnam to get an insight into shipyard workers. It was the last choice, a beginner reporter could choose. I stayed there about 2weeks. The only thing I remember is ‘it was a hard work’. My legs were drained out and reeled at the end of day. I was desperate that I had to work tomorrow like today.
However, the worse thing was fear ‘I could die on the job’. It was a place where you could fall down from 10 meter height if you miss your step. There was no safeguarding net in place. It was difficult to put up with the extreme stress from fear.
I actually was told that middle-aged woman fell down from 6 meter height. It was the result of scaffolding wire being disconnected by someone. As per protocol, it is forbidden to loosen scaffold wire or screw but it often happened when it gets in the way of a job. Then, it must be re-connected but the previous worker didn’t and the lady fell. It wasn’t disclosed who loosened the scaffold.
I heard the woman became a hemiplegic. I was intensely anxious by the news thinking how people could work in this environment. I felt like I was stepping in a mine field.
Hemiplegic, but still ‘zero’ incident rate
On the other hand, I thought that the serious incident would bring changes, at least safeguarding net. It would not have happened if it had been installed.
However, the shipyard was surprisingly silent. All workers in the shipyard hushed up. Even the scoreboard we see every day on the way to work was unchanged. In front of the factory main gate, there are big signs displaying ‘Work safely’, ‘Incident free days’ and ‘No work fatality days’. The numbers rarely changed. 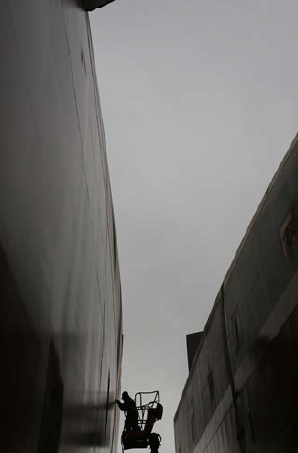 The next day the lady worker became a hemiplegic, nevertheless, the number was still unchanged. It was supposed to count from ‘incident free 0’ if there is an incident incurred at work but they didn’t. Their ‘incident free’ clock was the same as yesterday and going toward 400 days, I remember.
Then, my ‘fear’ changed to ‘doubt’ and I pondered the issue on my way back to Seoul later on. As long as the incident is not handled through the industrial disaster process, ‘incident free’ does not change. That means the injured lady did not get the benefit from industrial accident compensation. It was silly that it was wrapped with ‘incident free’ even though an injured person exists.
The question is still there. Why were the injuries not recognized as an industrial accident?
Repeating the circle of death, what is going on at HHI?
There is a video, detailing the story of a shipyard in Ulsan. It is about a worker killed at work. One worker working on a ship crashed into the sea suddenly. The steps that were taken immediately after were bizarre. The company does not call 119 which is a top priority in that situation but the union calls an hour later. It is not clear why the company did not call 119. Despite everything, a rescue-diver arrives in an hour after the worker fell down into the sea. The worker came back to his family dead.
This is the video taken of the fall accident at Hyundai Heavy Industry (refer to as HHI) in March. 1 died and 2 were injured following this incident. The reason why we bring this story again is to explain the background of
13 workers (including affiliates) were killed at HHI in 2014. They were all subcontracting company workers. 2 more were killed even in this year. Again, here subcontractors. Why do they die on the job and during what work? Couldn’t it been prevented? Why does it continue? There are back to back questions.
There may be a structural problem beyond those deaths. Wouldn’t there be a reason why so many are suffering unnecessary death?
One more, it may sound odd but dead workers are compensated from industrial disaster process but how about work-related injuries? Applying for industrial disaster compensation is a prize beyond their reach for most workers. Most workers seek treatment on their own. This is the reality though their companies pay for industrial accident insurance. The injured middle-aged lady was the same. Why?
We
Workers used to hold a memorial service to appease killed workers’ soul at the corner where ships sailed away in the past. A number of workers were killed to build such ships.
Deaths are still happening at this time and it is said to be ‘inevitable’. It is deemed natural to ‘die on the job’ at some point. Why does such a mentality exist? This report has been planned to find the circle of death with cooperation of Ulsan industrial accident free association and labor health.
Tags: hyundai Heavy Industry, Hyundai workplace injury, occupational injury

“Wish I could remove the word of ‘suicide’ covered with my husband..”

“Mongjoon Jeong is coming to HHI to collect bills”