“Wish I could remove the word of ‘suicide’ covered with my husband..”

“Wish I could remove the word of ‘suicide’ covered with my husband..”
The husband was a shipyard worker. Mr. Beomsik Jeong, he was a veteran who worked at shipyards for 12 years. He was a sander. Sanding is a job to grind and smoothen the ship surface by shooting high pressured metal powder so that it can make painting easier.
He was a member of ‘supply team’ who float all around several shipyards. It refers to a daily paid worker working for ‘a subcontractor’s subcontractor’. The team was minimum 10 to maximum 30 travelling around different cities; Mokpo, Geoje and Ulsan..basically wherever work is. They didn’t mind Sundays.
His wife met him 10 years ago through her friend. He was selling house goods in Gupo Market, Busan at that time and they started their honeymoon from there. Not long after the second baby was born, he started working at a shipyard as it was tight to raise 2 children with the small family business. His older brother recommended the shipyard work promising a reasonable income and he actually made good money. However, it was physically hard work and he had to stay at a company provided accommodation apart from his family.
When his older son became a 3rd grade middle school student, he hesitantly said to his dad. “Once I visited my friend, I saw my friend talking to his father about school and friends drinking beer together and I was very envious about it. I would like to do the same thing with you.” Hearing that, Mr. Jeong decided to live with his children again and do the shipyard work only 5 more years then, do something else. It was because he needed some money to settle down with family. 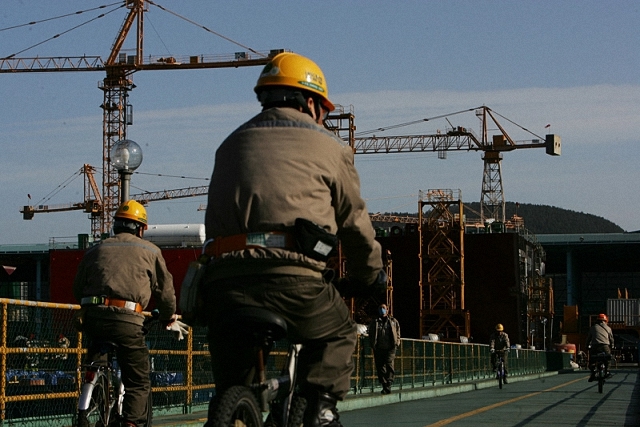 Shipyard view : pic by Jung gi hoon
He said the family would live together in 5 years but…
The dream ended as a ‘dream’, however. It was April last year. His wife received a call from Hyundai Heavy Industry (refer to as HHI below). He had worked 15 days. She heard the urgent voice over the phone that her husband was injured. He was found hung around an air hose. He died from suffocation.
When he was found, he was clinging to the 3.5 meter high work fence, 50 cm above the ground just as it was he was working a little while ago. He was wearing a thick working suit and dust mask with his wrist fully bandaged with a sticky tape and work gloves so that metal powder doesn’t go in. It was apparent he sustained an incident during the job.
She never expected an occupational injury as he had never shown his pain apart from danger. She realized how dangerous the working environment was but had to accept his death.
Everything has changed since his death. She became afraid of talking to others. It was a heart stabbing pain talking about someone’s husband like nothing happened. Other’s consoling words were also not comforting to her. Her negative state of mind grew and she was eventually disconnected from others.
But she had to live. Their livelihood was jeopardized after his death so she started working at a small fabric factory, where her close friend was working. Her friend encouraged her to come out of the house and talk to people but it wasn’t easy, to have relationships with people. She couldn’t open her mind and she quit finally.
Being unable to leave her alone, her younger sister suggested running a hair salon with her. It was April this year. She was still dazed at the shop, however, and when people visited the shop they whispered ‘she looks gloomy’. How it looks could not be concealed.
Why do I have to set my husband’s memorial rite table?
She prepared his memorial rite table last May. She doesn’t remember how she prepared as tears burst at a grocery shop where she was looking for the table food. ‘Why do I have to set my husband’s memorial rite table?’
She is pulling herself together for her children. Something might happen to her children’s future if she breaks down. She has a second grade high school boy and a second grade middle school girl.
She still sees her husband standing at the back of their children in her dreams at night. She believes he couldn’t go to the afterlife yet but hangs around the children even now. He was a big man for children. Is that so? The son hasn’t gone out of home almost for a year since his death. The pain he experienced was tremendous. He started to go to school at 6 am in the morning from this year. He said it was to study but it was doubtful. It was a kind of signal ‘I don’t want to see anyone’ going to an empty school by an empty bus.
On the other hand, he mimicked a grown man. He painfully hid his emotions. The father used to say to his son ‘you must take care of your mom and sister when I am away’ so he is acting like a grown up adult and feels like a big brother to his mom sometimes.
The cost of living was a problem after he died. The son quit a private academy since he knew they could not afford it anymore. The mother felt sorry for it and she encourage him to continue the academy but his son made an excuse that he didn’t like it.
One time, she received a text message ‘watch out for MERS’ from her son while she was working. He said don’t walk around outside but she didn’t really care. What he was really concerned about was, losing his mom.
The son is only 18 years old. It is heartbreaking to see him trying to take over the heavy burden on his shoulders in his dad’s absence. 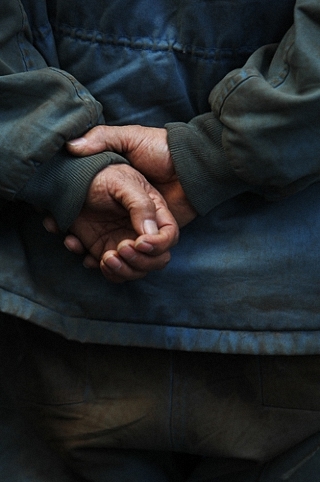 pic by Jung gi hoon
The stigma from the bridle of ‘suicide’
The most heartbreaking thing was the report of ‘suicide’ that the police concluded. In June 2014, the police concluded that Jeong hung himself after a month long investigation. The police stated that ‘there was no possibility of occupational injury at all and no evidence for homicide either. From the circumstance, it is clear that he killed himself’.
‘The circumstances’ police presented are as follows; a small outstanding credit card bill, a past psychiatric consultation record, a 4 month old message which indicates conflicts with his wife. The bottom line was he hung himself due to marriage problem.
It was difficult to understand. Even the day before he died, they exchanged sweet text messages and the outstanding card bill was paid off 15 days before he died. It was suffocating that he committed suicide even after these facts. As there was controversy in the parliamentary inspection in 2014, the police started to re-investigate.
She somewhat expected that the truth of his death would be revealed if the investigation was thoroughly conducted. However, it was concluded as ‘suicide’ again in March this year. The police said it was not 100% suicide but not an accident either so they closed the case as suicide again.
There was no reason for him to kill himself. He was remembered as a generous and great dad by his children.
They just want to remove the word of ‘suicide’ covered on his death and this bridle stopped them from being compensated by the company. It wasn’t acknowledged as an occupational injury either. The company owner who kneeled down at his funeral saying he would take full responsibility of his death is not responding to their calls.
Jeong’s mother is still alive. Worried that she might collapse by the news of his death, she was told that her son had moved to the States and Jeong’s wife had to celebrate holidays alone unable to tell the truth to her mother-in-law.
When can I let him go?
The son recently has a wish. It is driving around town in dad’s car sitting next to him. He must feel dad’s absence more and more every day. Jeong’s sister-in-law who is running a hair salon is the same. She calls in whenever it rains thinking of her brother-in-law. He used to take such a good care of her.
She thought it would have healed as time passes. It did take too long to realize she was wrong. Nobody was recovering from the loss.
Mrs. Heejeong Kim (46), the wife of Jeong said, “His absence is getting bigger and bigger and I don’t know how I can carry on”.
She also said, “Moreover, the word of ‘suicide’ attached to his death, makes it even more difficult for me to accept his death. Why would a family man commit suicide due to a marriage problem”.
“I will definitely trace the reason for my husband’s death for myself and my children and get rid of the stigma of ‘suicide’ attached to his coffin”, she added.
Mrs. Kim has currently applied his case for an occupational injury at Korea Labor Welfare Corporation and the result will be available soon but she can’t be optimistic as the police concluded he killed himself. They look forward to the day when his name will be cleaned and they can let him go.
Tags: HHI, hyundai Heavy Industry, Hyundai workplace injury, occupational injury