Head opened, leg broken..No Worker’s Compensation!
Flashing back 10 years ago in shipyards, there were so many deaths. While welding in a dark LPG cargo tank, he saw a ‘devil-like blooming’ smoke from the tank. It was a fire. The friendly shout of “Bro, come out and have some bread” changed to a scream of “Get out!”. His colleague who told him “Let’s have something and take a break” just a while ago did not come out of the ship alive on that day. He let so many friends go in that way for the last 10 years.
He also just missed several fateful moments. He had his head opened, ribs broken and back hurt many times. However, he never claimed the Worker’s Compensation for fear of reprisal  from his employer in Ulsan shipyard.
The shipyard welder, Mr. Young-bae Kim (52) who worked for 11 years at shipyard said, “Hyundai Heavy Industry (refer to as HHI below) was built by our worker’s deaths”.
Subcontracting company owner begged “Help me” when requested Worker’s Compensation
“When I was admitted at the hospital due to broken ribs, it wasn’t even informed to the safety department in HHI. If someone is injured, it should be reported but injuries are  usually concealed.”
In August last year, Mr. Kim a subcontract worker of Hyundai Mipo Dockyard fell down from a 2 meter high scaffold. He was chased by the manager that the process was behind schedule and he had to rush to finish even working after hours.
As he welded, sparks flew up everywhere and the flames also went into Mr. Kim’s work shoes. Worried about a burn, he was just about to take off his shoes and the stepping scaffold collapsed. He fell down to the piled equipment and was injured.
There are scaffolds set around the worksite in shipyards, so that they can easily access to work in height but it was loose at the time of injury. ‘The accident was waiting to happen’.
As the fall wasn’t considerably high, he thought it was a minor contusion but he couldn’t move himself or talk. It was a rib fracture.
He was admitted at the hospital. The day after the incident, the subcontracting company manager called him. His first word wasn’t ‘how are you? Are you okay?’ but blame “I’ve seen so many workers with fractures at the shipyard but you’re the one who was admitted at the hospital”.
“I didn’t mean to request the Worker’s Compensation. While working for a shipyard, I have been injured several times, I’ve never thought of the Worker’s Compensation. Not just because of the work atmosphere for subcontract workers but also I can’t cause damage to my company…”
Even though you are injured at work, conceal first. This is an unwritten law for subcontracting companies at shipyard so many occupational injuries are covered up. Though people cut their hands by grinder, break bones by fall from a height, they either pay out of their pocket saying ‘injured at home’ or their subcontracting companies pay medical expenses (providing treatment cost or other compensations under the condition that workers do not request the Worker’s Compensation). This is due to the ‘invisible rule’ that subcontract worker who applies for the Worker’s Compensation must leave the company.
“The shipyard owner gives subcontracting companies pressure to achieve ‘incident free’ environment and subcontracting companies conceal occupational injuries to gain more contracts or renew contract with shipyard but they can no longer hide if their worker reports to Worker’s Compensation. Then, the reported worker cannot survive in the subcontracting company anymore.”, the Metal union HHI branch director, Mr. Chang-min Ha said. He has recently conducted ‘Investigation for Occupational injuries concealment’ six times.
Following the accident, Kim wanted to process his case through the Worker’s Compensation but he agreed to be treated according to their regulation due to company’s ‘pressure’ or ‘begging’. When he first mentioned the Worker’s Compensation, his company owner who never even called him for over a week after the injury came and begged ‘Help me’. His company wasn’t even insured for Worker’s Compensation. 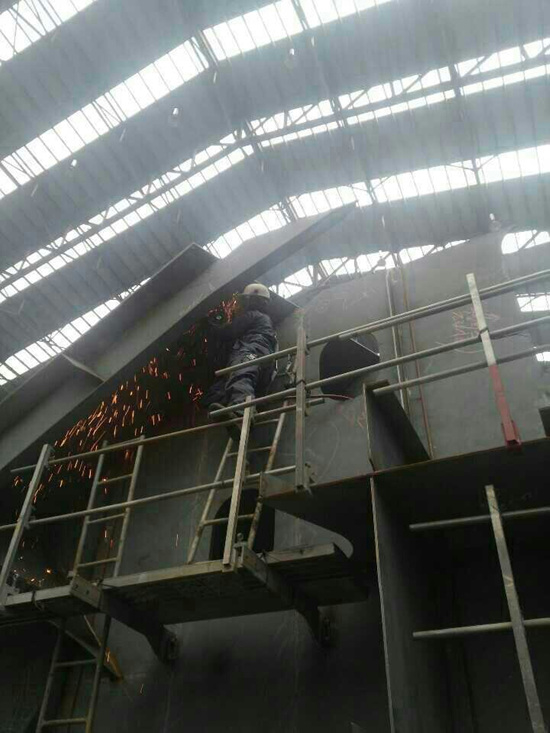