On August 11, the 42-year-old migrant worker from Mongolia, named Bayas Garlang, died after falling off from the upper part of a cargo tank at 09:13 a.m. The total fall was approximately 5 meters.

He was taken to a nearby hospital shortly after the accident, however was pronounced dead at 10:33 a.m. He was working for Gi-Rin Tech, which is one of the subcontracting companies in HHI, and was responsible for painting the cargo tank.

The Regular Workers` Union in HHI announced, “Regarding this terrible accident, we will accuse the management and the persons who are in charge of labor safety in HHI as well. Furthermore, we urge HHI to hold the consultation council on the safety and health, and the Ministry of Labour and Employment to conduct a special supervision on HHI, which is based on The Occupational Health and Safety Act.”

Moreover, on September 1, there was another occupational accident in HHI dockyard. According to In-house Subcontract Workers` Union in HHI (hereafter ISWU), the 35-year-old worker, named Park Chang-Rim, working for the Dae Guk Company, which is one of subcontracting companies in HHI, was crushed to death at 09:40 a.m. He was taken to a nearby hospital shortly after the accident, however was pronounced dead at 10:34 a.m.

He was responsible for cutting coaming stiffeners at the engine room located at the second dock. The fresh water tank, which was being lifted by the second goliath crane, fell down over Mr. Park`s head, which crushed him to death.

The successive deaths of subcontracted workers and the restructuring plan is closely interrelated.

Ha Chang-min, the representative of ISUW, explained, “Recently HHI management announced a restructuring plan including divesture of the machine equipment sectors. Workers are against the plan and joining the strike. Because of the strike, the driver and the signaler who had been working with Mr. Park at the moment of the accident were assigned to the task for the first time. When the management put in substitute workers, they should use skilled workers as alternative manpower. However, the driver and the signaler who were deployed to work with Mr. Park that day were newcomers. Any workers who are well-informed of workplace safety do not allow anyone to work under the lifting route of the crane. HHI officially denied the interrelation between the successive deaths of subcontracted workers and the restructuring plan. However, this tragic death obviously shows how an one-sided restructuring plan puts workers in danger. This a clear evidence of the interrelation”

This year alone, already 11 workers have died while at work in HHI complex, including the accidents mentioned above, and 8 out of the total 11 victims are subcontracted workers. (see the table below)

NGOs argue that HHI and shipbuyers should take responsibility of the deaths of subcontracted workers.

NGOs and ISWU believe that this number and the successive deaths of workers clearly show that the measures and the policy taken by HHI to prevent workplace accidents are ineffective.

Also, they are arguing that the measures do not pursue the due diligence stipulated in the UN Guiding Principles on Business and Human Rights and OECD guidelines for multinational enterprises: HHI officially has not assumed responsibility of the deaths of subcontracted workers. Since 2015, ISWU has demanded the collective bargaining, including the participation in the consultation council on the safety and health, which is based on ‘The Occupational Health and Safety Act’. However, HHI has neither accepted this demand nor recognized ISWU as a trade union, because ISWU is the subcontracted workers` union. Moreover, HHI has never officially expressed any regrets to the bereaved families.

HHI Workplace Injury Network and ISWU believe that shipbuyers who place orders for ships, plants, etc. to HHI are also responsible for the breach of HHI: they urge shipbuyers to take actions to prevent and mitigate workplace accidents in HHI. Otherwise, their nonperformance amount to a breach of the norms aforementioned. 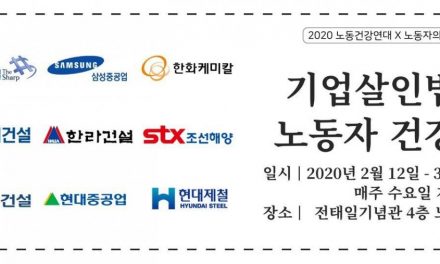