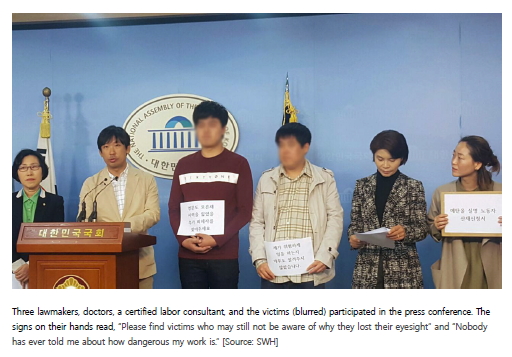 PRESS STATEMENT
Another methanol poisoning accidents
identified in the SAMSUNG supply chain
—————————
Contact person: Hyeyoung Park (SWH), Eunji Kang (KHIS), Donghyun Kim (KLPH)
Tell: +82-2-469-3976
Email address: khis21@hanmail.net, dhkim@hopeandlaw.org
—————————
SEOUL, South Korea, October 17, 2016 ? According to Solidarity for Workers` Health (here in after SWH), two more occupational accidents related to methanol poisoning were recently reported in the SAMSUNG Electronics’ supply chain.
A 29-year-old male worker surnamed Kim who was dispatched to DuckyongENG, a subcontractor for SAMSUNG, showed signs of blindness on February 24, 2015. Also, on January 16, 2016, another 35-year-old male worker surnamed Cheon working for BKTech, which is also a subcontractor for SAMSUNG, showed the symptoms of blindness on the way back home from work. He was taken to a nearby hospital on the following day, however he lost his sight in his right eye, and most vision in his left eye. Both of the victims have only recently realized that their accidents are deeply concerned with the methanol poisoning, thus decided to report their cases to SWH.
z
Methanol can cause headaches, nausea, vomiting, sight loss and even death. Ethanol is recommended over methanol because it is less toxic, but ethanol costs three times more.
Both of the workers were responsible for the process related to CNC equipment. The CNC (Computerized Numerical Control) machine is a tool capable of processing and scaling metal materials to a previously input value. The CNC equipment used by the victims is a cutting tool that cuts according to previously input levels. The machine maintains refined control while carving aluminum metal, thus, was used to produce a large amount of mobile phone parts.
Both of the victims worked in the process of producing mobile phone parts using the aforementioned CNC equipment; methanol was used as cutting oil in this machinery. The cutting oil was used when cutting metal materials, to have the blade cooled and lubricated so as to remain clean and, thus, extend the life of the machine overall. The CNC equipment used by the victims had a hose that automatically sprayed the cutting oil to the blade. As a result, a high concentration (99.9%) of methanol was continuously sprayed while the machine was in operation.
There remains “high possibility” of the existence of
unidentified victims.
Including these newly reported 2 cases aforementioned, up to date a total of 6 methanol poisoning accidents which were concerned with CNC process in the electronic industry supply chain have been identified to the public. All of these accidents occurred during the past two years. According to industrial health doctors, this is unprecedented; they are saying that these kinds of occupational accidents like the methanol poisoning had been disappeared long ago in the early 20th Century.
What is even more shocking is that there remains high possibility that more victims who might be diagnosed with acute methanol poisoning caused by the exposure while working in the CNC process have not been identified yet.When a series of accidents occurred in February, 2016, the Ministry of Employment and Labor conducted an inspection over all the factories in which methanol was used. After the inspection, the Ministry announced that there is no more poisoning case in the workplace. However, these accidents aforementioned have not been identified by the Ministry at that time, which shows that the announcement is unreliable. Also, according to Kim, one of his colleagues also having trouble with the eye vison did not report his case to the Ministry.
A press conference was held at the National Assembly on October 12, 2016. “I came forward because I hope there will be no more victims like me,” Kim said at the press conference. Also, Cheon said, “I haven`t heard how dangerous my work was.”

SAMSUNG, a prime contractor should take the responsibility for the methanol poisoning in its supply chain.
treatment methods for methanol. The workers neither received notifications of the substance’s danger nor had on-board orientation regarding the danger of their work. In addition, the workers never saw a Material Safety Data Sheet (MSDS) during the course of their employment.
NGOs argue that SAMSUNG, a prime contractor should take the responsibility for the methanol poisoning in its entire supply chain. Specifically, they urge SAMSUNG should directly monitor not only the first tier subcontractors but also the second and third tier ones.
However, SAMSUNG has not officially assumed any responsibility for the occupational injuries of its subcontract workers. So far, SAMSUNG does not recognize the responsibility to directly monitor its second and third tier subcontractors, saying that it is ‘impossible’ for prime contractors to inspect all subcontractors, because there are too many. Moreover, SAMSUNG insists that it is capable of monitoring only first tier subcontractors, whom they have a direct contract, not subcontractors behind the first tier.
This argument obviously goes against what the UN Guiding Principle on Business and Human Rights (hereinafter UNGP) and the OECD Guidelines for Multinational Enterprises say about the responsibility of prime contractors in the supply chain. The right to work in a safe environment is fundamental and significant, which should be enjoyed by all workers irrespective of the tier of their workplace in the supply chain or whether they are directly employed or dispatched.
Victims and NGOs have already submitted the LETTER OF ALLEGATION to the UN Working Group on Business and Human Rights last June, arguing that SAMSUNG, one of the respondents, has abandoned its responsibility of monitoring the violations of occupational safety and health stemming from its subcontractors beyond the second tier in the supply chain, which constitutes the violation of the UNGP. NGOs are going to provide updated information about the two newly identified accidents to the UNWorking Group.
More information
1. Samsung, LG subcontract wokers, blinded by methanol intoxication (youtube)
https://www.youtube.com/watch?v=YubIsJLia4Q
2. Methanol poisoning victims speak out(koreaherald)
http://www.koreaherald.com/view.php?ud=20161012000807
3. Infringement of the Right to Health for Laborers in Samsung and LG Electronics’ Supply Chain Operations
[WGBH]Methanol_UN 기업과인권 워킹그룹 방한 메탄올 급성중독 보고서(영문)_노동건강연대.pdf
Tags: blinded, galaxy, methanol poisoning, samgsungm 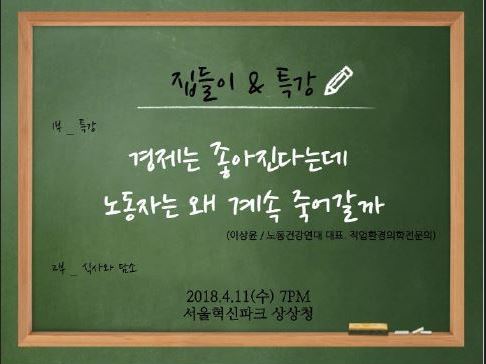