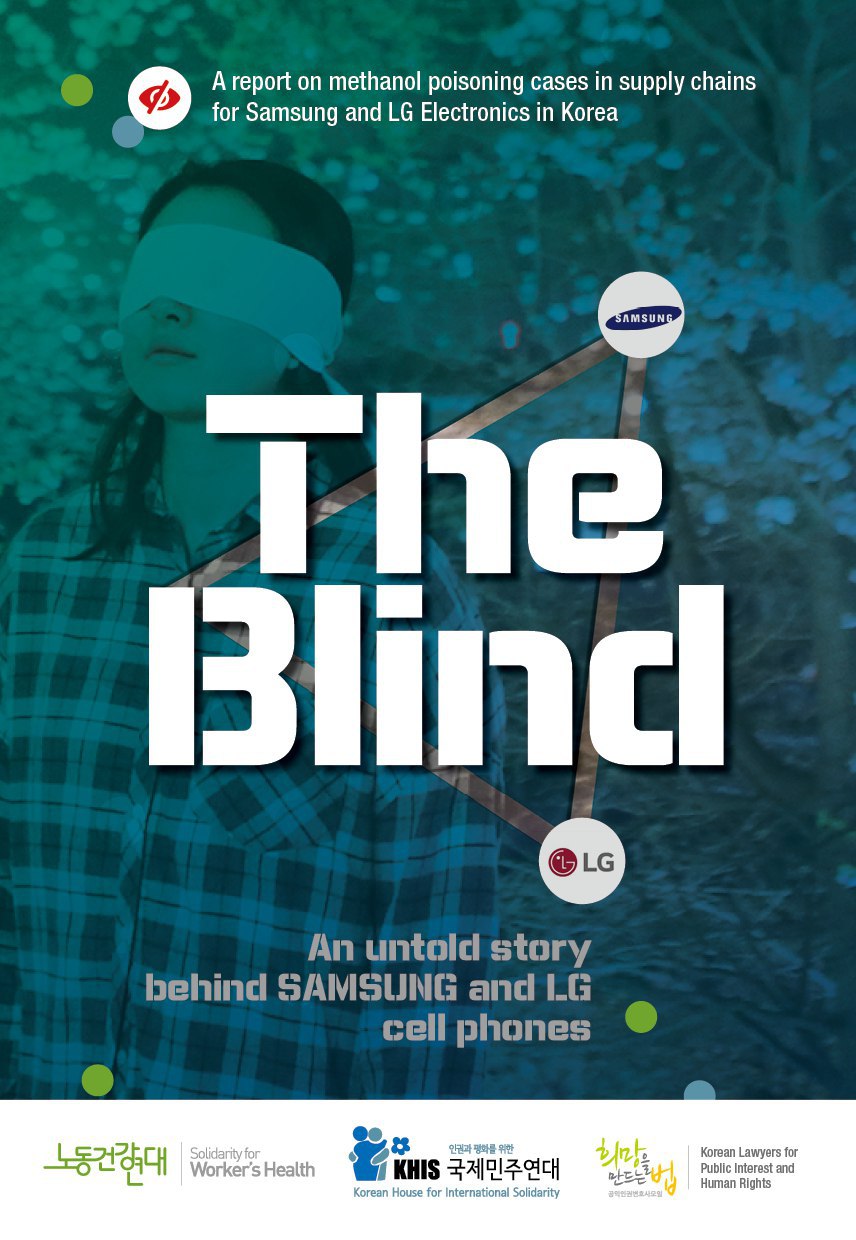 The book is edited and translated from the research report titled “Follow-up study on the acute methanol poisoning victims in cell phone manufacturing subcontractors with recommendations for improvement.” The original report was prepared and published in December 2016 by Solidarity for

Workers’ Health, a NGO that advocates for workers’ health and safety and the prevention of occupational injuries and diseases commissioned by Korean Industrial Hygiene Association.

From January 2015 to February 2016, at least six workers developed acute methanol poisoning while working on the third-tier suppliers manufacturing cell phone parts for Samsung Electronics and LG Electronics. All of the workers had been working on the CNC (Computer Numerical Control) process cutting small aluminum parts for cell phones such as USIM trays. They had to manage 5 to 20 machines per person. The machines spray out methanol all the time as methanol was used as aluminum cutting oil. The standard manual recommends the use of ethanol not methanol. However, the subcontractors used methanol as it is much cheaper than ethanol with similar function. Methanol is toxic damaging optic nerves. However the workers were neither informed of the danger of methanol nor provided with safety measures.

Furthermore, these third-tier suppliers illegally used temporary dispatched workers, which is direct violation of Korean labor laws. The workers had to work 12 hours a day in order to make up their low wage. Some worked only on night shift as it gives higher hourly wage. Temporary workers are often not registered for the four major social insurances (health, employment, workers compensation and pension). They also have no protection from arbitrary dismissal. The first reported victim had no time to notify his absence to his factory in advance as he was hospitalized at a hospital immediately. However, no one asked his whereabouts.

The victims did not know for which cell phone brands they were producing. After they found out they were making Samsung and LG cell phones, the world-famous electronic brands, now they ask Samsung Electronics and LG Electronics “How can you say you are not responsible for me even

though I got injured from working for you? Why did you put us in danger by outsourcing the process to the suppliers with horrible working conditions? How can you never say sorry?”

The victims and labor/civil society organizations sent open inquiries and demands to Samsung Electronics and LG Electronics three times. We demanded Samsung and LG recognize their responsibility for the precarious and complex supply chain structure and come to social dialogue to fulfil their responsibility. However, they only answered they have no plan or intention to do so.

situation as it is. It is impossible for the victims who had received minimum wage to prepare for their future only with a mere particle of government supplementary living allowances. The victims with their eye sight lost and brain damaged are left behind without meaningful compensation.

The methanol poisoning case clearly shows the reality of insecure employment, in particular, the precarious supply chain structure exploited by big conglomerates in Korean society. Lead companies such as Samsung and LG Electronics take no responsibility for risks though they benefit from the

structure enabling them to use workforce at a minimum cost.

The Korean government is not free from the responsibility. There have been repeated criticisms about the situation where dispatched temporary workers face the highest occupational health and safety risks for more than 10 years now. However, the Korean government did nothing to improve the structural problem.

Against this background, we decided to translate the research report in English in order to let the international community be aware of the situation.

Once again, we strongly demand Samsung Electronics and LG Electronics to recognize their responsibility and come to social dialogue with the victims and civil society organizations. The two big companies acknowledged the victims were producing parts for their cell phones. Nevertheless, they claim their supervision responsibility is only limited to their first-tier suppliers which have direct contract with them in the multi-layered subcontracting structure. Samsung and LG should be aware of that their stance is going against the international trends of expecting business enterprises to respect

human rights across their supply chain.

On behalf of all the publishers,

The Blind _ A report on methanol poisoning cases in supply chains for Samsung and LG Electronics in KOREA.pdf

Solidarity for Worker’s Health (SWH) is a NGO that advocates for workers’ health and safety and the prevention of occupational injuries and diseases. It was founded in 2001 through collaboration between labor activists, healthcare professionals, and law professionals. It has made efforts to protect health and safety of marginalized workers including precarious, women, and migrant workers, and has raised reform agenda on appropriate compensation for workers and labor regulations.